In my younger days I was a massive fan of arcade beat ‘em ups; Golden Axe, Final Fight, Double Dragon, TMNT, the list of great quality titles was endless. I never managed to find one on a home console that could re-capture that arcade feeling and I didn’t think I ever would. A lot of the home ports just simply weren’t up to scratch in comparison with the originals. Then one day I came across Streets of Rage on one of Sega’s cabinets. This didn’t suffer the porting issues of the games I mentioned before, as it was developed for the Mega Drive first and foremost. I instantly fell in love with the series at this point, but where SOR was a good game, SOR2 upped the ante significantly! 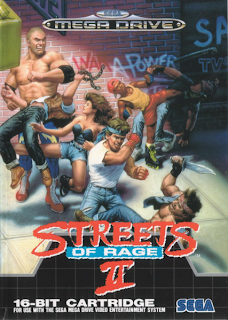 Let's not beat around the bush, Streets of Rage 2 is a phenomenal game! It screams quality from the moment you boot it up, and the lavish care and attention put into it shines through in all aspects of the game. It was clearly a labour of love and it's testament to the skill and devotion of the development team that the game remains so playable and entertaining today.
The series was first seen in 1991 when we were introduced to Axel, Adam and Blaze, and their nemesis the notorious Mr. X! Streets of Rage 2 was released in the UK in 1992 and far exceeds the first game in every single department. It’s the pinnacle of the series and a beat ‘em up that was, in my opinion, never bettered in the 16-bit era on any console. 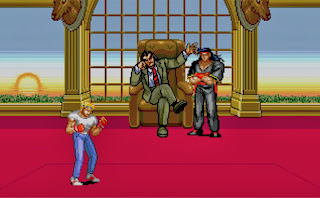 SOR2 borrows ideas heavily from some very well known and well-respected fighting games of the time, namely Street Fighter 2 and Final Fight.  A lot of the special moves are blatantly ripped straight from Street Fighter 2, such as Blaze’s fireball and Axel’s “hundred hand slap”. There’s even an enemy boss character with a frightening resemblance to Blanka! This is no bad thing as the game is all the better for it, and the moves are animated fantastically and are great fun to perform. The move set was extremely extensive for the time and all characters had their own range of specials, some of which sapped your strength when used. This added an element of strategy to the game and prevented you from using your special moves too often.

Without doubt this game is one of the most fun games you will ever play. A big statement backed up by a big game (a 16 Meg beast of a cartridge at the time to be precise!).  The basic mechanics are standard side-scrolling beat ‘em up fare, but that really doesn’t do justice to how well those mechanics are implemented. This is a beat ‘em up bursting with bells and whistles, as well as a few more dubious instruments such as knives, drainpipes and swords!  The game takes place over 8 rounds, each culminating in a boss battle. Players take to the streets on their own or with a partner and battle through hordes of Mr. X’s henchmen before the final showdown. There are 4 playable characters each with differing abilities, the usual trade-off being speed for strength and vice-versa.

The graphics in this game really are spot on. Nice big sprites, detailed backdrops and some great animation. Forget any notions of grand sweeping vistas here, you’ll be too busy battling through punk-infested city streets, construction sites and manufacturing plants to take in the scenery! Also the collision detection, which can be the bane of so many fighting games, is absolutely pixel perfect here. There are a nice range of enemies to encounter along the way as well, including some very memorable bosses!

In all great games the music should integrate seamlessly with the action, and here it is certainly no exception. A music score from acclaimed composer Yuzo Koshiro has you smashing up punks accompanied by some awesome tunes that were amongst the best of the era! The anticipation when the boss music kicks in really gets the blood pumping! In SOR2 the music really adds to the atmosphere, as do the sound effects, which are some of the best the Megadrive was capable of producing. Blows land with satisfying crunches, bodies hit the ground with jarring slams and phone boxes shatter with the expectant cacophony of breaking glass. There are also a couple of decent voice samples in there, with Axel’s “Grand Upper” being the pick of the bunch that everyone remembers (as well as being by far the best move in the game!)

As well as cramming in one of the finest beat ‘em ups ever, the content in the cartridge is still bursting at the seams with other extras. Not content with providing a tremendous 2-player co-op experience, Sega saw fit to throw in a decent one on one versus mode as well! Unlike other games of the time, these fights weren’t played out on a 2D plane but in fixed arenas taken from the game itself. Complete with weapons littered around it was perfect for settling those arguments about who was the best character (for the record it was Axel by a considerable margin; if anyone tells you different then they clearly haven’t played the game on Mania difficulty!) The obligatory 16-bit menu system is in place here, with sound tests and lives, difficulty etc. but there was also a cheat to unlock the aforementioned Mania difficulty setting as well as more lives and same character co-op. Other in-game extras included extra lives hidden behind scenery throughout the stages, and the ability to land on your feet after being tossed unceremoniously through the air by one of the Signal clan punks! (Hold Up + C before you hit the ground since you’re asking!). It’s even possible to perform some special moves backwards, which is great to see in action as you manage to take someone out whist also putting some distance between yourself and the oncoming horde to plan your next move.

I hope it’s abundantly clear from this article just how much I love this game. I played it to death for most of the 90s and I still play it regularly today; it’s never ever far from my Mega Drive cartridge slot! There are so many features packed into this game that I really could write about it for days. Indeed this very article has been through more revisions than any other I have ever written. The need to accurately convey the brilliance of this game, and my desire to do it justice has haunted my dreams for a while! There are so many touches of genius and the attention to detail is staggering for a game of this era. Skate struggles to swing the heavy drainpipe, whilst Max is so strong he can take people out in front and behind him. Blaze is a knife expert and has her own unique move set when equipped with one. All the enemy groups have related or themed names. The backgrounds wobble when enemies are slammed to the floor. These are but a few of the nice touches and flourishes evident throughout the game.

If anyone reading this has genuinely never played Rage 2 then I implore you to look for a copy and you certainly won’t be disappointed. If you do own it but haven’t played it in years then I hope I’ve ignited a desire deep within you to dust down the cartridge and boot it up. Picking a game that has had a profound impact on your gaming life is a near impossible task. So many great games have come and gone and I love all categories from RPGs through to platformers. I think most importantly for me, I wanted to convey the fact that although this game might not have a grand sweeping story, touch you deeply on any kind of emotional level or be remembered as a true gaming classic, it is simply ridiculous amounts of fun! When you think about that, remember back to your childhood and recall that sense of fun that accompanied so many other great titles. It’s one of the main reasons so many of us began this gaming journey together in the first place!
Posted by Negative Resistance at 12:50